This has probably been one of the hardest blog posts that I’ve ever tried to write. Not because of the content. Nor the fact that it’s the first time I’m posting my drivel on a new platform and I’m still learning how to use Hugo. No siree Bob! None of the above.

The reality is that between work and two young children, I can barely find time to scratch my arse, let alone write a technical blog post. But, somehow, between the nappy changes, the cleaning up of puke and the endless interruptions, I finally managed to get pen to paper - albeit it took about thirty attempts to get there.

Now, I know what you’re thinking: _“You promised us that your first post on your shiny new blog would be pictures of your dog!"_. Indeed I did, and for this I’m truly sorry. However, if you continue reading to the end you’ll find a wee little surprise waiting for you.

Recently, our team needed a simple way to schedule a bunch of BigQuery SQL queries to run. Nothing fancy, just a good ‘auld fashioned SQL pipeline really. Currently there’s a few ways (hacks) to do this.

There’s also BigQuery’s scheduling feature, but we see a few limitations with that. Most notably it’s tied to a user account, and this ain’t gonna fly with your boss when staff offboard. Also, it only allows you to schedule one query at a time. But, what if you need to run N queries sequentially and they are dependant on each other? Or if you want to run other commands like a gsutil? Or even just some plain bash? Oh, the humanity!

Finally, there’s the Cloud Composer option. Sure, that will work fine as long as you have deep pockets. It’s enterprise grade, which will also keep those snazzy architects up in their ivory towers real happy. However, it’s a heavyweight solution to a very simple problem. It’s got a huge infra footprint, and you need to pay for it twenty-four-seven i.e. it’s not serverless - and we LOVE serverless in our team.

So, we got to thinking that there must be a nicer, easier, and cheaper way of doing this. We also like solving these types of problems and coming up with new ways of doing things. It keeps us frosty.

Let’s quickly recap. We wanted to schedule a few queries to run sequentially in BigQuery. Kind of like a serverless pipeline for SQL that we could easily build and deploy. Hmm..

Are you getting it?

The Steve Jobs fans go wild. The rest of y’all are asking yourselves once again “I don’t know why I bother reading Graham’s nonsense.", and I’d have to agree with those of you.

The solution was to use a combination of three serverless tools on GCP:

I’m going to assume you’re somewhat familiar with all this products and move on quickly. Try to keep up please.

The architecture was straightforward. Firstly, we set up a Git repo using Cloud Source Repositories. We then pushed a cloudbuild.yaml config file so Cloud Build could work its magic. That YAML file essentially defined our SQL pipeline i.e. a bunch of queries to execute in BigQuery.

Next up, we created a Trigger in Cloud Build, and linked it to our newly created Git repo in Cloud Source Repositories. We then promptly disabled that Trigger, because we didn’t want it triggering when someone pushed to the repo. Smart, eh? Finally, we fired up Cloud Scheduler and created a HTTP job, which pinged the Rest API endpoint for that Trigger.

Et voilà!. We had a simple, automated, serverless and cheap solution for scheduling BigQuery queries. It took us less than an hour to wire it up and get it working. No kidding.

Putting it all together

The concept sounds easy, and truth be told, it is. However, there were a few little things that tripped us up, so it’s worth walking y’all through the steps. That way you don’t have to make the same mistakes we did should you be foolish enough to use this pattern.

Fist up, here’s what our cloudbuild.yaml YAML file in Git looked like (obviously we’ve simplified this and created a demo repo for the purpose of this post):

Then we created a Trigger and linked it to that Git repo. See here. Then we disabled it so it wouldn’t be triggered on every push to the repo. I think I already mentioned that earlier, didn’t I? That’s the senile symptoms kicking in. It was by 40th birthday yesterday.

The last step was to wire this Trigger up to Cloud Scheduler and invoke it over HTTP. Now, for those of you who are already familiar with Cloud Build, you’re probably wondering why we didn’t just go straight to its API here. There were a few reasons for why we didn’t.

Firstly, I had overlooked that possibility and only thought of it later on when my much smarter colleague mentioned it to me. Let us never speak of that again. Thanks Chris if you’re reading this! Secondly, using Cloud Source Repositories forced us to have everything under version control in Git. Our config, our SQL - everything. We liked that.

Right, back to Cloud Scheduler. We needed to give it a HTTP endpoint. Here’s what that looked like (you need to insert your own project and trigger id):

Plugging that into Cloud Scheduler via the console seemed like it would work. However, it did not my friends.

We soon realised that by default Cloud Scheduler will not do any type of auth when the job is configured to hit a HTTP endpoint. That’s not to say it can’t do auth however. It can, but you just can’t do it via the Cloud Scheduler UI in the GCP console. If you try to, you’ll get this lovely error unceremoniously spat in your face:

However, the docs clearly state that you can configure the service account email address via the API when creating the Cloud Scheduler job:

Alas, we needed to create the Cloud Scheduler job from the command line and pass it a service account email address. We simply used the default App Engine one. It seemed like a reasonable one to try first as Cloud Scheduler is essentially running on top of App Engine anyway (AFAIR, Cloud Scheduler used to be “App Engine Tasks”). Our guess was right and it worked first time. For realz!

And just like that, it started humming along. Cloud Build got triggered every minute (our prod system was scheduled to run every two hours), and it ran our BigQuery queries without breaking a sweat. Frickin’ sweet.

Here’s Cloud Build getting triggered every minute and running some BigQuery magic:


And here's the log output from one of the builds that was triggered by Cloud Scheduler: 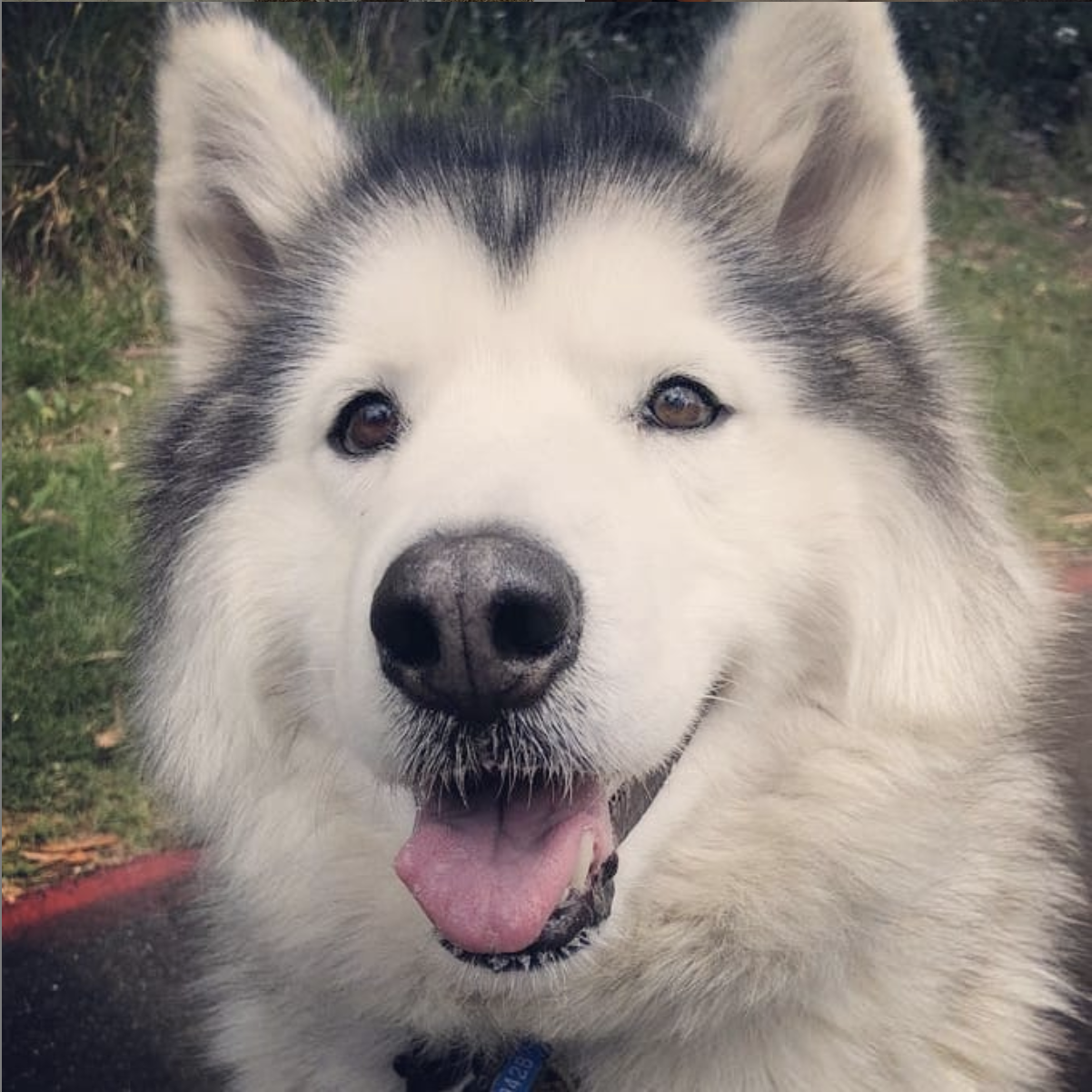 As promised, here’s the lovely Nikko looking as cute as ever. She’s such a sweetheart. Dogs are the best.

Alright, so recapping this post: I think it’s safe to say we came up with a great little solution for easily scheduling BigQuery queries. However, because it’s Cloud Build and everything is just a ephemeral container in your pipeline, you could really schedule and run anything you want. It doesn’t even have to be just calling gcloud commands, and GCP services. It can be any arbitrary code/software you want to run. Remember that.

A few of us in the office tend to agree on two things. The first is that I’m a charlatan. The second is that Cloud Build is an incredibly powerful, yet frequently overlooked tool on the GCP stack. It’s so much more than just CI/CD. You can use this little secret gem to get creative and solve lots of problems with it. It’s also cheap as chips and easy to use.

“Anthos? GKE? Nah, I’ll just use Cloud Build like a boss thanks."

That’s it. Must dash. I think I hear a faint cry of a baby wanting to be fed. No problem. It’s only 3:09am. The night is still young.